Which is the correct symbol for an isotope of iodine with 53 protons and 78 neutrons?

Answer from: ehhshsh
The answer is 131 I. Hope this helps!

Answer from: serenityburke
The correct symbol of Iodine with 53 protons and 78 neutrons is shown below.
The symbols comprises two numbers.

Atomic Number:
The number highlighted BLUE is the atomic number of Iodine. Atomic number shows the number o protons present in the nucleus.

Mass Number:
The number highlighted in RED is the mass number of given Iodine. Mass number is the sum of protons and neutrons present in the nucleus. So, 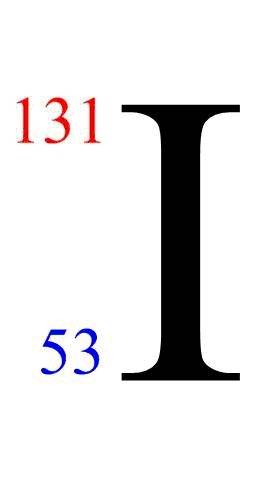 Another question on Physics

Physics, 22.06.2019 03:40
Two kilograms of water are initially a saturated liquid at 100 kpa. the water is heated at constant pressure to a saturated vapor. determine the work and heat transfer for this process and the change in enthalpy and internal energy of the water.
Answers: 3
Answer

Physics, 22.06.2019 05:00
The earth is constantly spinning on its axis, like you might spin a basketball on your finger. it is this spinning of the earth that causes
Answers: 3
Answer

Physics, 22.06.2019 10:00
Which subatomic particle has a negative charge
Answers: 2
Answer
You know the right answer?
Which is the correct symbol for an isotope of iodine with 53 protons and 78 neutrons?...
Questions

English, 28.12.2019 02:31
Which of the following is an acceptable method for altering time of alginate irreversible hydrocolloid impression material...

English, 28.12.2019 02:31
What part of speech does the word in capital letters play in this sentence? silver will tarnish if it is not polished often...

Mathematics, 28.12.2019 02:31
Which equation represents a line that passes through the two points in the table