Note: enter your answer and show all the steps that you use to solve this problem in the space provided. a parallelogram is shown with the diagonal drawn from the upper left vertex to the bottom right vertex. find the values of the variables x, y, and z in the parallelogram. the diagram is not drawn to scale.

The values of he variables x, y and z are

Step-by-step explanation:  Given that in the parallelogram shown, a diagonal is drawn from the upper left vertex to the bottom right vertex.

We are to find the values of the variables x, y and z in the parallelogram.

Let us name the parallelogram as ABCD as shown in the attached figure below.

∠ABD and ∠ACD are opposite to each other.

AD is parallel to BC and AC is a tranversal, so by alternate interior angles theorem, we get

Also, by angle-sum-property in triangle ACD, we have 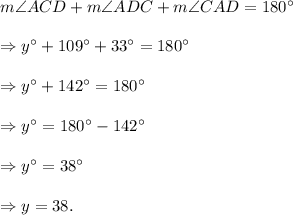 Thus, the values of he variables x, y and z are 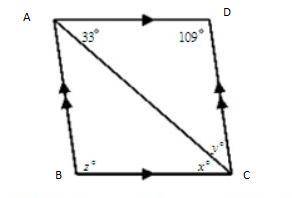 2- getting the value of z:
In a parallelogram, opposite angles are congruent. Taking a look at our parallelogram, we will find that angles z and 109° are opposite.
Therefore, they are equal.
Based on the above:
z = 109°

z = 109 (opposite angles in a parallelogram are equal)

Answer from: emiliestinnett
Answer x = 33°y = 38°z = 109°explanations first you have to understand all properties of a parallelgram for you to answer this questions 1). opposite sides are parallel and equal, 2). interior opposite angles are equal. 3). if a diagonal drawn, is acts as a transvers to the opposite sides. solving for x the diagonal drown makes the angle 33 to be alternate to x. alternate angles are equal. so, x = 33o solving for y the angle 33, 109 and y makes the angles in a triangle from the diagram. angles in a triangle add up to 180. 33+109+y=180 y=180-(33+109) y=38° solving for z opposite interior angles in a parallelogram are equal. the angle 109 and z are opposite interior angles. so z = 109o

Since z=109, this means that the triangle is congruent with the other. Since the congruent triangles are in a rhombus, then the angles are flipped. Thus, angle x =33°.

Answer from: edjiejwi
We know that both sides are congruent. There are congruence markings on the parallelogram. First, let’s find y. All the angles in a triangle add up to 180 degrees.

Since we know they share a hypotenuse and a leg, they are congruent by the HL theorem. The corner of the first triangle equals 109 degrees, so z=109.
Same for x, that is equal to 33 degrees.
I hope this helps!
~kaikers

Answer from: gumbyseth1969p45qjl
X should be 33 because its a z angle

Mathematics, 21.06.2019 17:00
The variable in a relation who’s value depends on the value of the independent variable is called what?
Answers: 1
Answer

Mathematics, 21.06.2019 19:30
Tim's phone service charges $26.39 plus an additional $0.21 for each text message sent per month. if tim's phone bill was $31.64, which equation could be used to find how many text messages, x, tim sent last month?
Answers: 1
Answer
You know the right answer?
Note: enter your answer and show all the steps that you use to solve this problem in the space prov...
Questions

Mathematics, 21.04.2021 20:40
Based on the information given are two triangles similar? Need answerrr asap!

Computers and Technology, 21.04.2021 20:40
What is the “ten-foot barrier” and what does Austin do when he hits this? This is really for digital photography but there is not a section for this...

History, 21.04.2021 20:40
What are the responsibilities of the attorney general of Louisiana? Check all that apply. serve as the head of the department of justice defen...

Social Studies, 21.04.2021 20:40
Which statement is NOT true of Philip II's reign? O He was a devoted worker O He strengthened the Catholic Church Strengthened Spain as...
More questions: Mathematics Another questions
Questions on the website: 13536614