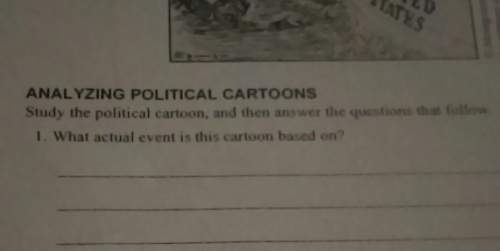 Answer from: Courtneymorris19
Your picture is cut off :(

At the global scale, political geographers study the spatial manifestations of political processes expressed in the organization of territories with permanent population, defined territory and a government. These spatial units are called states.

A state is a country with its own independent government and a hierarchical political organization that exercises authority over a population, legitimized by some form of law, enforced with a monopoly on the use of force. In political science the modern concept of sovereignty is added to this definition, but in history and anthropology it is not regarded as an essential characteristic, so that states can also be spoken of before modern times.

dont know the answer but its not b.

Answer from: genesisdiaz5123
C. development, political geography is not focused on the actual in depth history of politics and etc., but more what is going on in present day situations and boundaries, main topics, how politics affect different states etc.

Answer from: Hannahk18
Political geography studies all of the following except Economies.

Answer from: normakite
Political  geography  studies  all  the  following   except    Economies (  answer  A).    Political  geography  is  concern   with  study  of    both   spatially  uneven  outcome   of  political  processes  and   the  ways   in  which  political  processes  are  themselves  affected  by  spatial  structure. It    also  involve  study  of  boundaries and    their  associated  region.

History, 22.06.2019 00:00
What does the quote describe? “the closeness of the place, and the heat of the climate, added to the number in the ship, which was so crowded that each had scarcely room to turn himself, almost suffocated us….the shrieks of the women, and the groans of the dying, rendered the whole a scene of horror almost inconceivable.”
Answers: 2
Answer

History, 22.06.2019 04:00
How did inca develop their road system? a) they used mortar to hold the stones together.b) they built suspension bridges over rivers. c) they mixed copper and stone together to make the blocks.d) they laid roads in the cities, not in the less densely populated deserts.
Answers: 1
Answer

History, 22.06.2019 06:00
What was the biggest difference between government in ancient athens and in ancient rome? rome was a direct democracy, and athens was not. athens allowed all citizens to vote, while rome was a republic. athens allowed women and slaves to vote, but rome did not. rome had a bicameral assembly, and athens did not.
Answers: 1
Answer
You know the right answer?
Analyzing political cartoons
study the political cartoon
4. what actual event is this cart...
Questions

Biology, 05.01.2020 17:31
Which of the following is the most likely flow of energy in an aquatic ecosystem? a. phytoplankton ® fish ® zooplankton ® mammal b....
More questions: History Another questions
Questions on the website: 14424234

Be smarter, download now!
or
View a few ads and unblock the answer on the site
You can only ask a question in the app