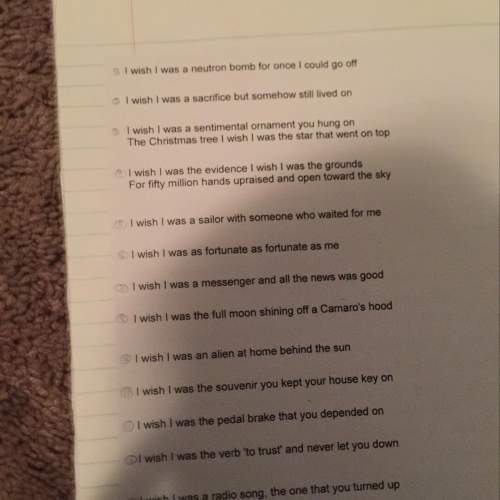 I wish I was a neutron bomb, for once I could go off

I wish I was a sacrifice but somehow still lived on

He wants to be associated with the deep, meaningful feelings of allowing oneself to be sacrificed (perhaps for the sake of a loved one) but somehow be allowed to live on and reap the benefits of that sacrifice

I wish I was a sentimental ornament you hung on

The Christmas tree, I wish I was the star that went on top

He doesn't want to be just a flashy lover whose commitment burns out, or just the slow-and-steady admirer whose love fades into the background -- he wants to be everything, whether that is deemed traditionally possible or not.

For 50 million hands upraised and open toward the sky

he just intends to create an image of unity, suggesting that his love is so strong that it would be enough to unite millions of people

To be on the receiving end of that faith, though, would show just how much the other person loved you, and it might even allow your shared love to expand more.

He may be trying to turn on its head the idea of a singer hoping for a situation better than the current one, or he may simply be making a poignant statement that the situation in which he finds himself is the best possible one, and so that is the one that he wishes for.

He's probably making reference to the fact that he always wants everything between him and his beloved to be positive, and he doesn't even want to consider the possibility of bringing her pain indirectly

He always hopes to have the perfect finishing touch for the situations he and his beloved find themselves in -- and approach these situations with a sense of fun, daring and freedom.

I wish I was an alien at home behind the sun

He could be making reference to wanting to be unique and wonderfully different, and bringing these values to his relationship.

I wish I was the pedal brake that you depended on

he wants the woman in his life to be able to depend on him not just in the sense of the more flowery language earlier in the song, but also in the sense that she would use him, in a way he is meant to be

He wants to be more than just the things he has already described -- he wants to be the very meaning of the words which she would use to describe him along with trust.

I wish I was a radio song, the one that you turned up

he wants to be the very definition of what she needs in a relationship. The "radio song" reference, though, is obviously a self-referential line to his being a singer and this being a song, and that he would love for his work (

Answer from: Quest
The answer is d. prior knowledge. she breaks it into parts in order to figure out what other words have the same parts to the word and put the meanings together.

Answer from: Quest
Dogs have been considered man’s best friend for decades! most likely because of their kind and loyal nature. they make splendid companions. their loyalty is beyond compare and after all, a dog is the only thing on earth that loves you more than he loves himself! dogs see us as their friends and leaders, they’ll do anything in their power to ensure your comfort and safety.

English, 21.06.2019 13:00
Locate the complete verbal phrase and identify its use. the birds singing in the trees cheered her. verbal phrase: type: unlimited attempts remain
Answers: 1
Answer

English, 22.06.2019 00:00
The overwhelming majority of the peoples and nations of the world today want to live in peace
Answers: 2
Answer

English, 22.06.2019 08:00
During editing and proofreading, you do not need to
Answers: 1
Answer
You know the right answer?
Ineed on for each sentences i have to write the statement meaning of the sentences
...
Questions

Mathematics, 29.04.2021 01:10
Write two different equations that describes the graph below. One using sin(x) and the other using cos(x) as the base of the equation.

Social Studies, 29.04.2021 01:10
I finshed this are the asnwers but are they correct? and no bots with links or i will report thease are the answers tell me if i am correct

Chemistry, 29.04.2021 01:10
How many moles of iron (II) ammonium sulfate hexahydrate reactant are needed to prepare 7.74 g of potassium tris oxalato ferrate trihydrate product if...
More questions: English Another questions
Questions on the website: 13830455